Are you looking to take your startup to the next level?

The Start of the Problem

As for me, things have started simple enough – from being inspired by 200 years’ worth of improving the growth of plants using electricity, I started off thoroughly researching the topic, writing a book on it, put it up on Amazon, and then proceeded to turn this into something more.  Along the way I found that there has been a need to get more capital to get things going.  After getting a little media attention, people started coming out of the woodwork to offer some support.

I was open to it, but once I started meeting people and feeling things out, things started to get tricky… because in my mind, I want to be fair – giving people what they deserve, but at the same time, I started to get completely overwhelmed – how does one structure a company to best handle the taking-on of investors or just people who want to contribute “sweat equity”.  In earlier business dealings, I was involved in a 50-50 partnership with another company but came across the common problem of the other party not pulling their share of the weight.  It was extremely frustrating to put in all of your efforts into making something happen, but the other guy only put in a fraction.  Now had we agreed to a smaller percentage, that may have been fine, but then he wouldn’t be incentivized to work any harder because his share was fixed.  In the end, I ended up breaking the partnership up and we went our separate ways.

Like I said before, this is an all-too-common occurrence in startup circles, and for the past few months I’ve been wracking my brain on this dilemma rather than spending my valuable creative energy on making progress.  Until one day I came across an answer posted in a forum answer on Quora (sorry – lost the original link)… The poster, Mike Moyer, posted a method that he was promoting in a book he wrote called “Slicing Pie“.

That said, I got a copy of his book and found it to be pure genius.  I believe he attributed the original idea to Harvard economist, Noam Wasserman, who I originally heard about while listening to one of my favorite podcasts, Stanford University’s ecorner or Entrepreneurial Thought Leader Series.  It turns out that he wrote a book on the topic, called “The Founders’ Dilemmas:  Anticipating the Pitfalls that Can Sink a Startup“.  When I first heard this back in 2012, it was the very early days of Electric Fertilizer, and while I was thinking that I could use this information someday – I just filed it in the back of my mind and forgot about it.  What a coincidence – it’s a great feeling to have something so valuable come back full circle, just when I needed it most!  So how does it work?

In it’s essence, slicing pie, or dynamic equity allocation, is based on the idea of being ‘fair’  – how do you give away equity in a way that’s fair for everyone involved?  It turns out, that the best way may to do it in a dynamic manner – so it changes over time.  So if you end up with a person on your team who is a star performer, but life happens and they get married, have kids, and need real source of income, then this type of arrangement would allow them to build up company equity, and in their spare time, assuming that they still want to contribute, can continue to build it up.  The same thing goes the other way – if the employee wants to feel things out by going slowly.  As the company builds traction, they can increase their contribution and be compensated accordingly.

In it’s essence, it comes down to having everyone keep track of their hourly rate.  Everyone’s rate is multiplied by a common risk factor of 2x.  If there is a cash contribution, the investor gains equity at a rate of 4x the amount spent (not given) – which I think is great because it gives the founding team the ability to control the equity that is given away through frugal use of funds.  Lastly, there is the event where everything is locked in stone, where everything becomes official – and he outlines 3 scenarios where that event should occur.

I am sold on this concept and think that it’s a fantastic yet simple system that should be included in one’s investment or hiring considerations.  It is truly a flexible system in that it makes bringing on new people or investors formulaic.  Taking the emotions out of it makes a huge difference.

To those reading this… have you ever heard of this?  Ever tried it out?  I would love to hear your comments or stories!

Natural Electricity and its Beneficial Effects on Plants

I just finished creating a new slideshow… See below.

What do you think? Let me know in the comments!

Let’s face it, we all go through hard times from time to time, some more than others. These periods of difficulty that come up in our lives can make dealing with the present nearly impossible. And when I say periods of difficulty, I can mean really anything – from getting a medical diagnosis that scares you, to to having a fight with your lover, to being afraid of the next meeting you need to attend. Anything that causes you emotional trauma can be helped with the following method.

I first heard about this method while listening to a podcast about EFT or Emotional Freedom Technique While I cannot remember the person who shared the technique (and after extensive searching can’t find her), she mentioned that a great way to release emotional pain is by journaling about it. The problem with journaling is that journals aren’t necessarily completely private. Online ones can potentially be discovered or hacked into and hard copy journals can be discovered. How to get around this?

As I recall, the technique was called “Writing Between the Lines” – and it works wonderfully well! It’s really simple, too… All that is involved is simply writing out your thoughts on a piece of paper and when you get to the end of the line, you go back to the beginning of that line and continue laying out your thoughts, fears, anger, anguish, etc. 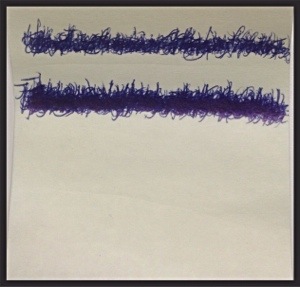 What you’re doing here is taking the time and space to write out your feelings, but note that as you write more and more, because you’re writing over what you wrote previously, you’re irreversibly hiding your words behind more and more ink. After a few lines’ worth of text, all of your writing becomes illegible and completely private.

For those who aren’t familiar with journaling, there are many resources available that can be explored. For example, on tinybuddha, they discuss a number of journaling tips to really thrive. In fact, they mention The Artist’s Way by Julia Cameron as one resource – that book is where I first read about the benefits of journaling to stimulate creative processes. From a mental health point of view, the University of Rochester Medical Center gives a bunch of mental health benefits that can come from it.

So the next time you’re feeling:

about anything in your life, give this a try and leave a comment telling me how it worked out for you!

Tonight, as we finished enjoying a part of our 2nd Shiitake harvest – sautéed in butter and Bragg’s amino acids, I wanted to share the journey of our 2nd fruiting cycle with you.
END_OF_DOCUMENT_TOKEN_TO_BE_REPLACED

I recently had the opportunity to give mushroom growing a try – as a way of understanding how they grow with the hope that I may be able to shock them in such a way that I can increase their yields. I was given a four mushroom logs to grow at home, and boy was I excited to give this a try! So in this post I’m going to share with you my experiences with giving mushroom growing a try.
END_OF_DOCUMENT_TOKEN_TO_BE_REPLACED

Around mid-summer 2013, the St. Louis-based innovation think tank, Openly Disruptive, invited me to give a presentation based on the theme of sustainability and local food as part of their Disruptive Diner Series.  I decided to create a presentation entitled: “3 Ways Electricity Can Be of Benefit to Urban Agriculture“.  It’s not what you think!

END_OF_DOCUMENT_TOKEN_TO_BE_REPLACED

A Brief Overview of Growing Plants with Electricity: Electroculture 101

I would like to share with you my latest blog post in the form of a slideshow.  I am starting to experiment with different ways of creating content and I hope that your find this informative and worthy of your attention.

In the slideshow below, I touch on the high-points of electroculture – what it is, how it works, and some applications.  Enjoy!

Interests of Interest
Create a free website or blog at WordPress.com.